While Coronavirus has us all social distancing, bring the WOW factor to your Zooming with our sister-company, Zoom Mystery!

Professionally hosted U-dunnit Mysteries. Invite your friends, family or colleagues from anywhere in the world to enjoy this all new KILLER Murder Mystery Party.

You'll love this stress-free, super fun show in which your gang plays the suspects and culprit, while being lead by one of our pros.

Check it out today! 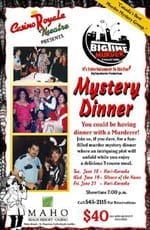 The cast and characters were incredibly funny and totally professional, all, are well achieved actors and actresses with impressive careers. I’m sure you’ll recognize them from the movies and television.

What an unforgettable wonderful eveneing of laughter we enjoyed last Friday night.

If you weren’t at Maho to participate in the hilariously funny dinner mystery Hari Karaoke you really missed out. Tears were streaming from our eyes at all times since there was not one dull moment for the whole three hours.

The cast and characters were incredibly funny and totally professional, all, are well achieved actors and actresses with impressive careers. I’m sure you’ll recognize them from the movies and television.

I regret not having seen the other show, imagine what those characters have been like, believe me next I’ll be the first in line. Especially being here in St. Maarten where we can definitely do with a little bit more entertainment.

The wonderful aspect of the whole spectacle was the participation of the crowd. The cast mingles with you beforehand over cocktails and pick the participants. All this in less than an hour. To see our friends Billy Flagg and Rancho’s Mario on stage making total idiots of themselves as the beer guzzling redneck truck driver’s backup singers was just too much. Not to mention our Elevator Jim as Leonardo DiCaprio parading on the Titanic with a suspiciously tall masculine Kate Winslet who was just as impressive.

Seeing the YMCA boys perform their tush shaking number was the limit. Stephen you should join the cast.

As an extra bonus, some of the cast members were awfully pleasing to the eye. Billy Flagg couldn’t keep drooling over the aspiring nymphomaniac actress while the girls were going gaga over the very shaggalicious nerdy waiter turned singer turned hunky policeman. (The handcuffs sure added extra spice for additional fantasy material).

Out of delight I looked up BigTime Murder Productions on their Website and found out they also provide Hillbilly weddings, that would be a hoot, imagine! (Too bad I’ve been there already too many times).

Thank you guys for an incredible evening, we all certainly would like to see you back again.

Peter Dillon, BigTime’s founder and President-At-Large, is a Top Forty Under 40 award recipient and was named one of Ottawa Life Magazine’s Top 50 People. He has been a professional actor for close to 30 years and appeared in dozens of Films, Television shows, Radio / TV commercials, and 1000s of Comedically Interactive Dinner Theatre productions all over the world. Besides being a regular in Big Time’s incredibly popular Murder Mystery shows, Peter can be seen in TV shows Murdoch Mysteries, SUITS, Orphan Black, Saving Hope, Flashpoint, NIKITA, Degrassi The Next Generation, Hell on Wheels, Quantico, to name a few. Over the years he’s shared the screen with Ernest Borgnine, Denzel Washington, Ed O’Neil, Teri Garr, Angelina Jolie, Dan Aykroyd, Sandra Oh, and many others. In 2001, Dillon co-founded A.C.T. (Acting for Cinema and Television), a company that offers screen training courses, and does its part to introduce local performers to casting agents and producers. Learn more about Pete at PeteDillon.com.

Sign up for our newsletter and receive special offers.

Have an event that you want to go off BigTime?

We've entertained hundreds of thousands of guests across the globe, from large corporate events to small private functions.

We can recommend a venue for your event or we can perform at whichever venue you choose anywhere in the world! We've performed all over the world, from the Persian Gulf to Vancouver, from St. Maarten to St. John's, Newfoundland, from Bermuda to Miami, Montreal, Calgary, New York, Ohio, and on and on.

Book a show now for your next special event!