While Coronavirus has us all social distancing, bring the WOW factor to your Zooming with our sister-company, Zoom Mystery!

Professionally hosted U-dunnit Mysteries. Invite your friends, family or colleagues from anywhere in the world to enjoy this all new KILLER Murder Mystery Party.

You'll love this stress-free, super fun show in which your gang plays the suspects and culprit, while being lead by one of our pros.

Check it out today!

by Denis Armstrong, The Ottawa Sun 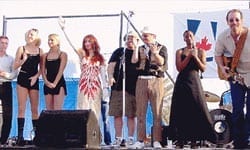 With global tensions heating up the Persian Gulf, the Defence Department called in the big guns last month.

The comedy theatrical company, after all, is used to entertaining stressed-out corporate clientele. So, in January, the company shipped out for a 12-day tour of Canadian camps to give our troops some comic relief.

As guests of the Department of National Defence’s Forces Personnel Support Agency, BigTime provided fast-footed sketches of American Idol and The Gong Show that had the audience up on its feet.

The rest of the time, the company – billeted in a secret location – schlepped around the base talking news from home with the troops, some of whom have been stationed in the Gulf since October.

Between shows, Dillon and company enjoyed deep-sea fishing in the Persian Gulf.

“The fishing was great, 26 degrees and the water was the bluest I’ve ever seen,” he says with unrestrained enthusiasm.

“On my right was Iran, to the left was Kuwait and straight ahead was Iraq. It was so peaceful and beautiful, it was eerie knowing what’s going on.”

In the end, the 12-day excursion was more emotionally exhausting than physically taxing.

“I asked a soldier what the worst part of being station in the Persian Gulf was: The waiting, the heat, the danger?,” says Dillon. “‘The hardest part is my son turns four tomorrow and I can’t be with him,’ he whispered.”

The experience has renewed Dillon’s affection for his country.

“We sand O Canada after each show. It was an experienced that every Canadian should have. We’re just as patriotic as Americans. We just need a reason.”

Dillon found his reason in the soldiers.

“Our mission was to build the morale in the troops, with the best show we could do,” he says.

“The troops thanked the cast after each show. But they had it backwards. It was we who should be thanking our armed forces for the hob they’re doing. The experience has left me feeling proud to be Canadian and proud of our armed forces.”

Would he do it again?

Dillon has the Midas touch. The entrepreneurial-minded actor lauched BigTime 11 years ago with only $5,000. The company has since grown into one of the country’s largest corporate and private entertainment agencies, producing 140 events and bringing in more than $250,000 a year in revenues out of its Ottawa and Toronto offices.

The troupe’s next public appearance is at the Devonshire Public School fundraiser on April 5.

Peter Dillon, BigTime’s founder and President-At-Large, is a Top Forty Under 40 award recipient and was named one of Ottawa Life Magazine’s Top 50 People. He has been a professional actor for close to 30 years and appeared in dozens of Films, Television shows, Radio / TV commercials, and 1000s of Comedically Interactive Dinner Theatre productions all over the world. Besides being a regular in Big Time’s incredibly popular Murder Mystery shows, Peter can be seen in TV shows Murdoch Mysteries, SUITS, Orphan Black, Saving Hope, Flashpoint, NIKITA, Degrassi The Next Generation, Hell on Wheels, Quantico, to name a few. Over the years he’s shared the screen with Ernest Borgnine, Denzel Washington, Ed O’Neil, Teri Garr, Angelina Jolie, Dan Aykroyd, Sandra Oh, and many others. In 2001, Dillon co-founded A.C.T. (Acting for Cinema and Television), a company that offers screen training courses, and does its part to introduce local performers to casting agents and producers. Learn more about Pete at PeteDillon.com.

Sign up for our newsletter and receive special offers.

Have an event that you want to go off BigTime?

We've entertained hundreds of thousands of guests across the globe, from large corporate events to small private functions.

We can recommend a venue for your event or we can perform at whichever venue you choose anywhere in the world! We've performed all over the world, from the Persian Gulf to Vancouver, from St. Maarten to St. John's, Newfoundland, from Bermuda to Miami, Montreal, Calgary, New York, Ohio, and on and on.

Book a show now for your next special event!